“Want To Have Potential Customers Practically Begging You To Take Their Money?"

(Unlock These Pro Features To Unleash The Full Power of Commission Gorilla!)

Ok, you’re all set with the #1 affiliate page building software on the internet!

Before you start crafting those profitable affiliate pages and winning promotions, how would you like to have even more incredible features that can make you even more money with Commission Gorilla V3?

Don’t get me wrong. Commission Gorilla V3 works great on its own. It’s a killer piece of software. But if you’re truly serious about taking your affiliate marketing to the next level, then you want to have as many tools in your arsenal as possible.

The kind of tools that put the odds of success in your favor even more than normal. And when you add the power of these pro features, you’re going to take your affiliate promotions into a whole ‘nother stratosphere!

With the Commission Gorilla V3 Pro Upgrade, you’re sure to suck more cash out of your promotions like a hungry vortex on steroids.

How? By grabbing your visitor’s attention with ease while increasing scarcity.

Just by adding these features to your already existing Commission Gorilla V3 purchase, you’ll set yourself head and shoulders above the competition. Plus, you’ll exponentially increase the chances of domination in just about any niche that you desire.

Here’s what you’re about to unlock in the next few minutes:

Add Countdown Timers To Your Pages:

We use countdown (or scarcity) timers across all our promotions and the results have been astonishing!

By limiting the time your bonus is available you're encouraging your visitors to take action right away or they risk missing out on a great deal.

You can use date specific or evergreen timers on all your pages with just a few clicks and choose to automatically redirect visitors to any other page when the countdown expires (or simply reset the countdown to start again). 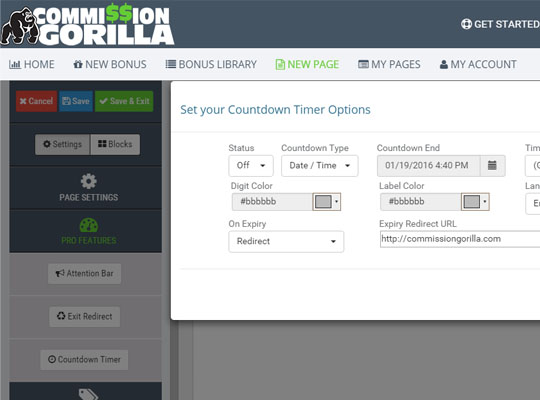 Add Attention Bars To Your Pages:

We love attention bars... Adding a new bar to your page is simple and it's a truly effective way to grab your visitor's attention.

Set them to display at the top of your page, change the colors and fonts, add a timed delay - It's up to you!

Use your attention bars to highlight a bonus, remind visitors about deadlines, link to demos or videos - You could even use them to link to other promotions or lead capture pages. 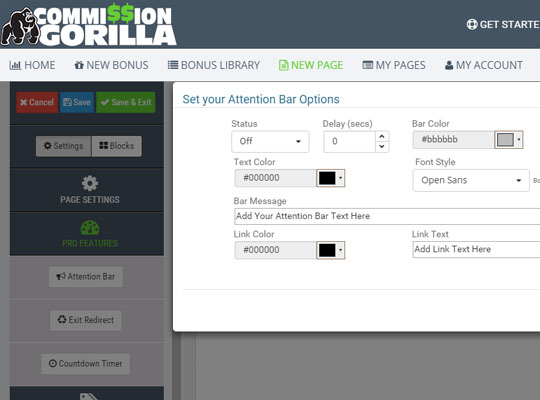 Add Exit Pop-Ups To Your Pages:

It's a fact that not everyone who visits your pages will continue to your recommended offers.

Our own testing reveals 50-70% will simply leave no matter how good your bonus is. But with exit redirects you get the power to recycle this 'wasted' traffic.

Send leaving visitors directly to the offer page (via your affiliate link) it can easily 'save a sale' , send visitors to a squeeze page to build your list, you can even show another bonus offer. 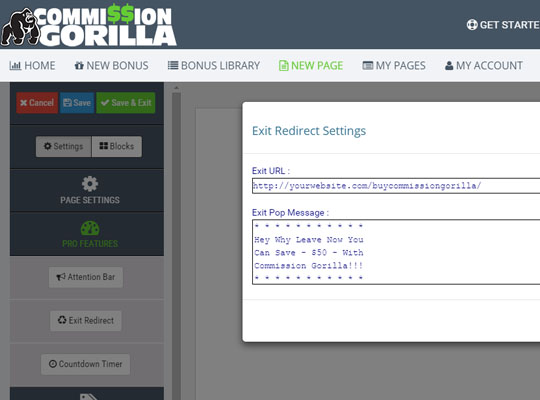 With this feature, we’ll move you from the corner suite to the penthouse of Commission Gorilla pages.  You’ll be able to create as many affiliate promotional pages as you like without any limitations at all. 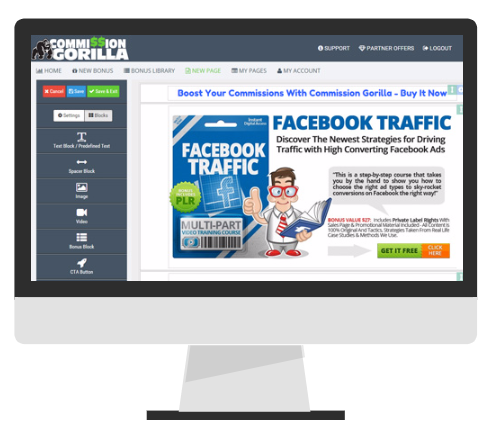 Total Control Over Your CGV3 Pages!

While all of the other features are sure to help you take Commission Gorilla V3 into overdrive, you'll also have the ability to:

This way, you'll stand head and shoulders above the crowd and make your pages even more unique than most affiliate marketers online!

Plus, You Can Export As Many Commission Gorilla Pages As You Like!

This is a great way to give templates to other marketing friends or use them as a paid service to other Commission Gorilla V3 users.

And if they don't own Commission Gorilla, you can make an affiliate sale for referring them!

“If You Knew You Could At Least Double Your Affiliate Sales and Conversions Forever, Wouldn’t That Be Worth At Least $1,000.00?"

Now let’s say I showed you how to do that while cutting your workload in half the time. So now what took you 20 hours a week only takes you 10 hours a week.

And the crazy part is, as long as you have a computer with internet access, you could do it from anywhere in the world.

Now I’m not saying you’ll generate $1,000 per month. Legally I can’t and quite honestly, I don’t know you or your work ethic. Heck, you could do a whole lot better!

But what I do know is that by adding these additional pro features to your order today, your chances for producing that and so much more just fell hilariously in your favor.

And even with that said, I still want to ensure we do everything possible to make sure you get the most out of Commission Gorilla V3. So go ahead and grab these next level bonuses and add them to your existing Commission Training V3 arsenal starting in the next few minutes:

This is the next level up from the Affiliate Gorilla Gold Silver Training.  You'll receive advanced strategies and tips on top of the awesome strategies in the silver level training.

In this video training, we’ll walk you through exactly how we do things as super affiliates.  You’ll learn things like: 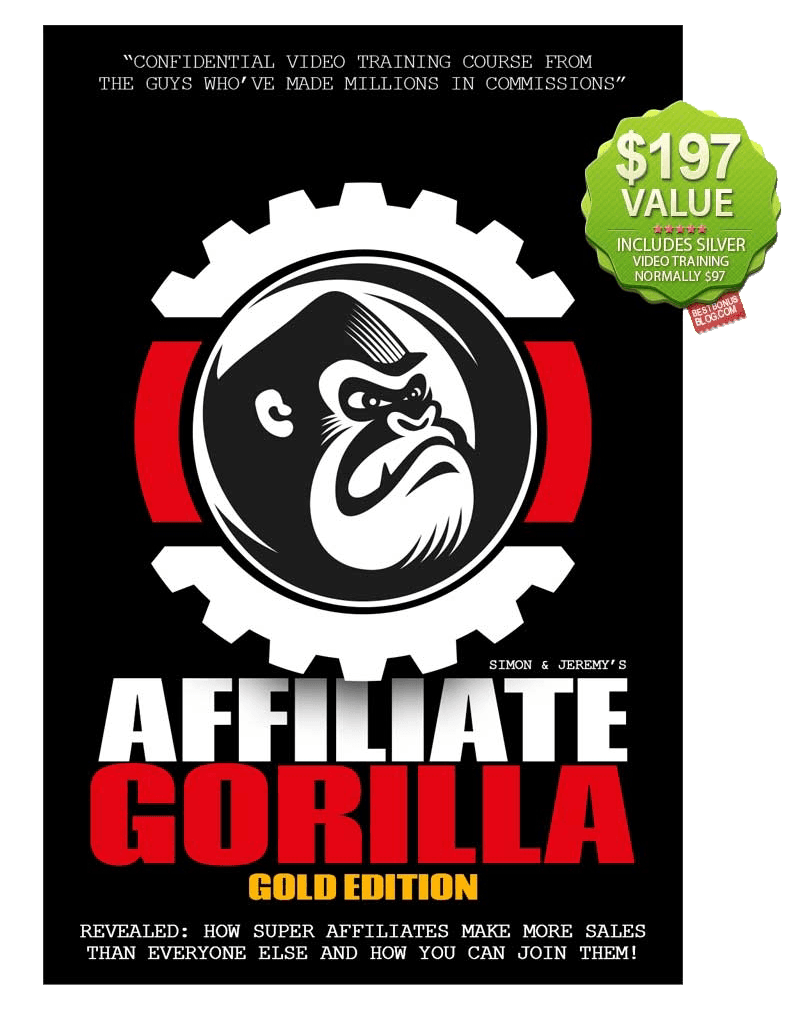 The one thing we’ve seen over and over on the internet is the question, “How do I get traffic to my site or offer?”  We’re going to totally pull back the mystique and show you how we do it.

With the Traffic Rampage Gold Edition you'll be introduced to advanced level strategies that will make all your traffic generation needs complete.  (The silver level is included with this training as well. 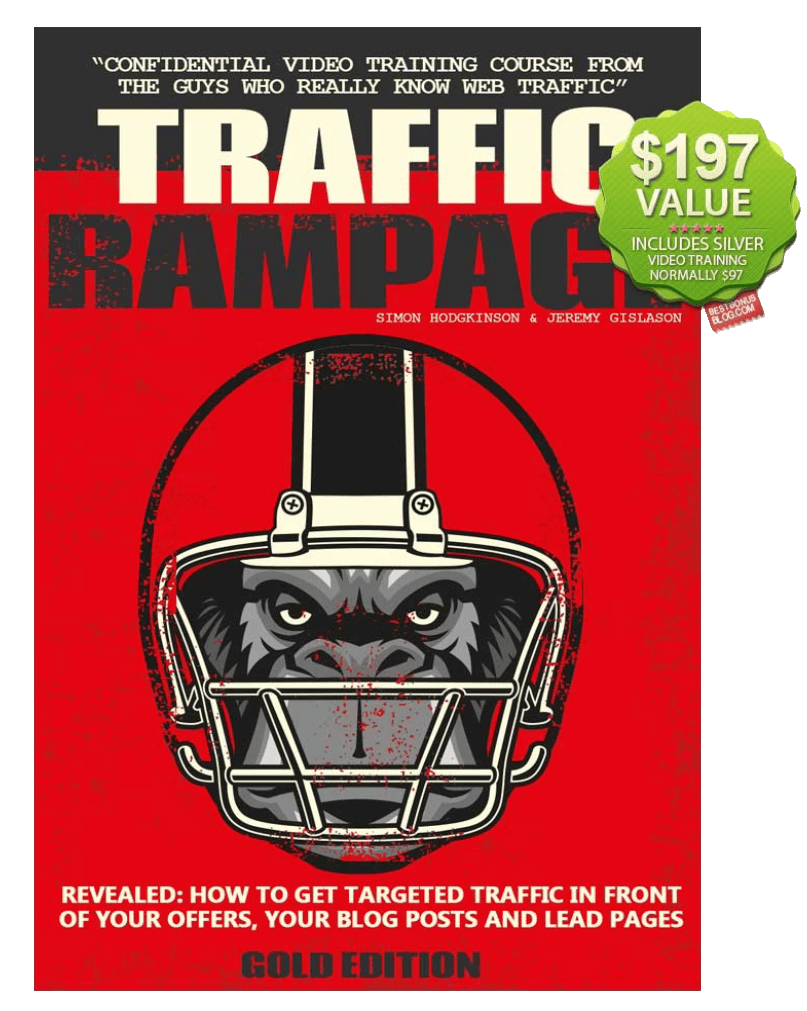 Ready To Upgrade?
Great! Here’s How To Get Started...

Ok, so you’re all ready to go to the next level with the Commission Gorilla V3 Pro upgrade right?

Getting started is incredibly easy. Just go ahead and use the button below and we’ll make sure to get your Commission Gorilla account all squared away after you upgrade today.

Then you’ll not only start building out affiliate promotional pages fast, but you’ll have them souped up like a Formula One race car on a barrel of nitro!

So don’t delay on this offer. It’s only for a limited time and the special pricing could be removed very soon.

Get The Commission Gorilla V3 Pro Upgrade For Only $87:

UPGRADE ME NOW - I'M PRO ALL THE WAY!

No Thanks - I Will Continue Without Upgrade